Health authorities continue to view e-cigarettes as a threat, but experts cite potential for harm reduction

More than 50 public health experts and nicotine experts, including five Canadians, are urging the World Health Organization not to classify e-cigarettes as tobacco products, because they say doing so could jeopardize a "significant health innovation" that could save hundreds of millions of lives.

In an open letter to WHO Director General Margaret Chan, the scientists from Europe, North America, Asia and Australia argue e-cigarettes are "part of the solution" in the fight against smoking.

"These products could be among the most significant health innovations of the 21st century — perhaps saving hundreds of millions of lives. The urge to control and suppress them as tobacco products should be resisted," the experts wrote.

The UN health agency seems to view e-cigarettes as a "threat" that should be classified like regular cigarettes, according to leaked documents from a meeting last November.

David Sweanor, a law professor at the University of Ottawa, who works on tobacco control, is one of the signatories. 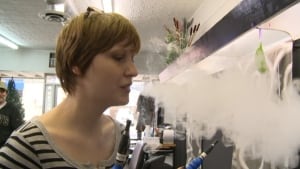 A move to classify e-cigarettes alongside regular cigarettes would push countries to take similar tough measures to restrict demand, such as through higher taxes. (CBC)

Sweanor and the other writers refer to "tobacco harm reduction" — the idea that 1.3 billion people worldwide who smoke could do much less harm to their health if they consumed nicotine in a low-risk, non-combustible form, given that the majority of harmful effects attributed to tobacco arises from tar and toxic gases drawn into the lungs.

In response to the letter, Penny Woods, chief executive of the British Lung Foundation, said: "The overall impact of e-cigarette use on public health is currently unclear. While they could prove to be an important tool to help people stop smoking, the unregulated status of e-cigarettes is problematic."

Nova Scotia plans to introduce legislation in the fall to ban the sale of e-cigarettes to those under the age of 19.

"We don’t want to see e-cigarette and flavoured tobacco juice again seeing smoking increase in our province," said Leo Glavine, Nova Scotia’s health minister. "We’ve had too many gains in a province that has high cancer rates and death strongly associated with smoking."

Health Canada continues to advise against the use of e-cigarettes.

"Currently, the advertisement and sale of electronic cigarette products, including e-liquid, that contain nicotine and/or have health claims is non-compliant with the Food and Drugs Act., and is therefore illegal," a spokesman for Health Canada said in an email.

"To date there is not sufficient evidence that the potential benefits of e-cigarettes in helping Canadians to quit smoking outweigh the potential risks. A company would have to provide evidence of safety, quality and effectiveness in order to have its product authorized. Without this scientific evidence, Health Canada continues to advise Canadians, especially youth, against the use of these products."

"I think that is the best news I have ever heard for the electronic cigarette, business it answers a lot of the misinformation that there is out there."

The writers of the letter say they wanted to get their message out now given that the WHO is set to review its tobacco recommendations in Moscow from Oct. 13 to 18.

With files from CBC's Pauline Dakin, Melanie Glanz and Reuters

One thought on “E-cigarettes could save hundreds of millions of lives, scientists tell WHO”