Banning vaping in stores would drive away customers, advocates say

The province was all set to ban the use of e-cigarettes in public spaces, offices, businesses and even in vape shops beginning January 1, 2016.

Damerla said her government would proceed with a ban on selling e-cigarettes to minors beginning January 1, “but we will not be proceeding with the piece around where you can and cannot use electronic cigarettes.” 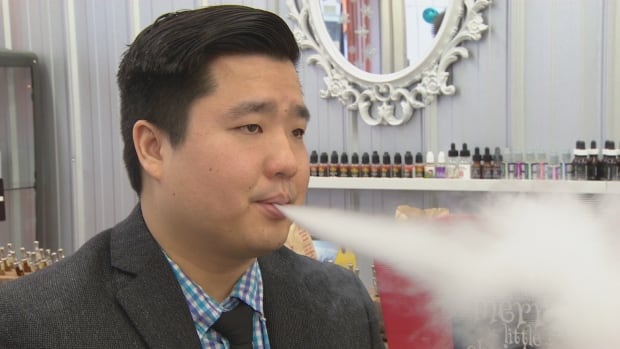 “We hope to bring that regulation into force very quickly and very shortly,” she added.

“If people can’t come into a store and try a product and see which one works for them, it’ll be really difficult to get away from tobacco,” Lepcha told CBC.

He explained that “different electronic devices need certain training to use and if people can’t come into a store and try a product and see which one works for them, it’ll be really difficult to get away from tobacco.”

Charlie Pisano, the co-owner of VapeMeet, agreed with Lepcha.

He said people need assistance to use his products safely and effectively.

“You need to be shown the safety features that come with them, how to use the liquid, how to choose the right liquid, and the way this bill is worded, there’s no way they can do that without the shops,” Pisano said in an interview at The Ecig Flavourium at Queen East and Jarvis Street.

He told CBC News most people agree e-cigarettes are a safer alternative to smoking but added that “this precautionary measure that the government is taking stigmatizes the product itself.”

In a statement, Damerla said the province is also “banning the sale of certain flavoured tobacco products and increasing the maximum fines for youth-related sales offences under the Smoke-Free Ontario Act” but emphasized that the government is not banning the use of e-cigarettes.